With its elliptical form, Pollenza lies on a ridge at 344 m above sea level and delimited northward by the Potenza River and southward by the Chienti River and the motorway SS 77. The mountain range of the Sibillini marks the skyline westward, creating a suggestive and vibrant landscape. Pollenza still preserves its Medieval walls, which symbolize its ancient origins. However, significant remains of a Roman-age Pollentia have been recently discovered further downstream from the town centre. Pollenza is well known for its artistic handcrafted works, which have been enduring for five hundred years: from pottery and majolica manufacturing in the past to woodwork and restoration of antique furniture nowadays. In order to convey the cultural heritage and the manufacturing activity of the territory, the municipality fosters the exhibition “Antiquariato Restauro – Artigianato Artistico” (Antique furniture restoration – Artistic manufacturing), on the second and third weeks of July every year. The exhibition takes place in the workshops and studios of the town centre, and delights tourists and visitors with many open-air shows and performances in Piazza della Libertà.

The visit
Numerous municipal palaces and highly valuable churches overlook the main street. The Church of San Giuseppe has a 16th century portal, but has a Baroque interior. The Cloister of the Clarisse, part of the church, is ancient and still populated by a religious community. On the main square are located the Town Hall of 1775 , the 1821 Church of Immacolata Concezione, and the Giuseppe Verdi Theatre, designed by Ireneo Aleandri (the designer of Macerata’s Sferisterio), and inaugurated in 1883. In front of the theatre, there is a 1913 bust of Giuseppe Verdi, unique exemplar in the Marche Region. The 13th century Church of San Francesco e Sant’Antonio has a 1932 portal, which incorporates the old Gothic one. At the end of the main street is located the Collegiate Church of San Biagio, whose façade reveals four columns sustaining the tympanum and a three-metre-high bell tower. Palazzo Cento, originally from the 16th century, was refurbished in the 17th and 18th centuries. Former residence of Cardinal Cento, it now hosts the Civic Museum, containing evidences of the town’s past, from the Roman age to the present, including a beautiful pagan altar, local handmade pottery, belongings of the Cento family, and a bizarre reproduction of the town centre. In the small chapel of the Palace, part of the mosaic flooring of a roman villa, located further downstream from the town, was recomposed. The mosaic shows in its centre a wild-boar-hunting scene, attributable to the Republican period, but inspired by more ancient models. The Palace also hosts the Civic Art Gallery, which exhibits paintings of contemporary artists from Pollenza.

Do not miss
Along the road connecting Tolentino and Passo di Treia, you can find the Abbey of Rambona. In the 9th century, the Lombard queen Gertrude is supposed to have built a church upon the remains of a pagan temple to the Goddess Bona (hence Rambona). Nowadays, all that remain are a deconsecrated presbytery and the magnificent crypt, divided into small naves composed of Roman columns with Romanic capitals. The frescos in the apse are attributed to the school of Lorenzo Salimbeni. Noteworthy are also the external apses, which are vertically punctuated by small white-stone columns. 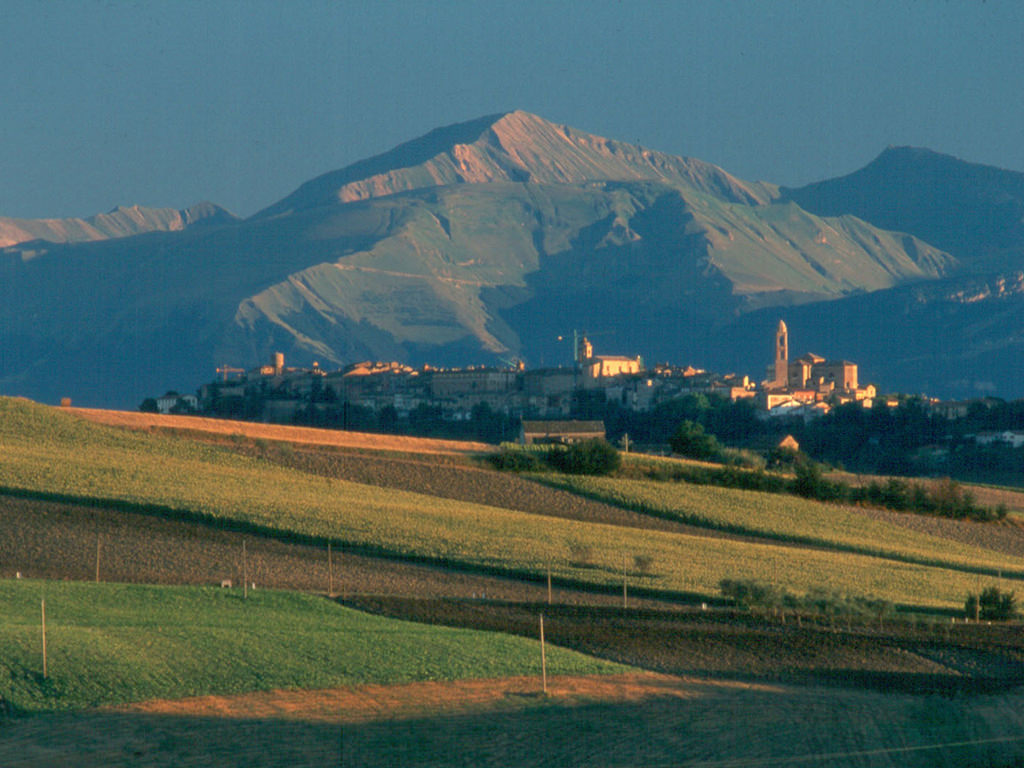 torna all'inizio del contenuto
This is the section of the institutional site of the Municipality of del Comune di Pollenza dedicated to tourism. For information regarding the organization, go to the home
This site is made by